Looking at a ‘Mass Black Implosion’ drawing is like watching the Millennium Falcon leap into hyperspace – your sense of time and space condenses from the macro into the micro. Artist and musician Marco Fusinato has been drawing the series for ten years and is exhibiting the latest instalment at Anna Schwartz Gallery in Melbourne. His original impulse was “to investigate my interest in noise as music”. Each work reproduces a significant score from the history of experimental music by the likes of Iannis Xenakis, John Cage or Percy Grainger, composers “known for attempting to extend the language of music.” Fusinato draws straight lines from each notehead towards a single point, often in the centre of the page, creating a dramatic data visualisation of each composition’s implied sonic density.

This aesthetic has become Fusinato’s calling card, gracing the covers of records (Anthony Pateras’ ‘Chromatophore’), books (David Grubbs’ ‘Records Ruin The Landscape’) and it made Fusinato’s name internationally when the Museum of Modern Art, New York City, included some pieces in its first major sound show ‘Soundings’ (2013). The most ambitious set within the series, a reproduction of British composer Cornelius Cardew’s epic 193-page score ‘Treatise’ (1963-67), featured recently in the first iteration of ‘The National’ at the Museum of Contemporary Art, Australia.

His now-trademark gesture complicates the perennial question of what a score is (a question also being asked in ‘The Score’ at the Ian Potter Museum of Art, which includes one of the drawings). Is the score an historical cache that archives the composer’s intentions? Is it summative, describing the ideal aural result, or a practical set of choreographic instructions that a performer brings to life? Is it a composition’s central ‘text’, perhaps even the work itself?

In the 20th century, many composers placed great importance on their scores’ physical appearance and took at least as much care over them as the subsequent performance. Cardew, for one, was by day a bold sonic polemicist and by night a professional graphic designer, adding another literal layer to Fusinato’s overlays. The precarious nature of the experimental scene meant that sometimes the score was all that literate fans ever encountered.

Cardew returns in this new set alongside favourites John Cage and Anestis Logothetis. Newcomers include the eccentric and influential French composer Erik Satie, whose forward-thinking ‘Ogives’ predates others in the series by some decades, and the Argentinian composer Mauricio Kagel whose anarchic 1970 music theatre work ‘Ludwig Van’ commemorating Beethoven’s 200th birthday is here brought to heel. Also appearing is George Crumb’s amplified string quartet ‘Black Angels’, a wrenching response to the Vietnam War, and Steve Reich’s rarely-heard ‘Phase Patterns’ whose formalist structures are obvious candidates for the Fusinato treatment. 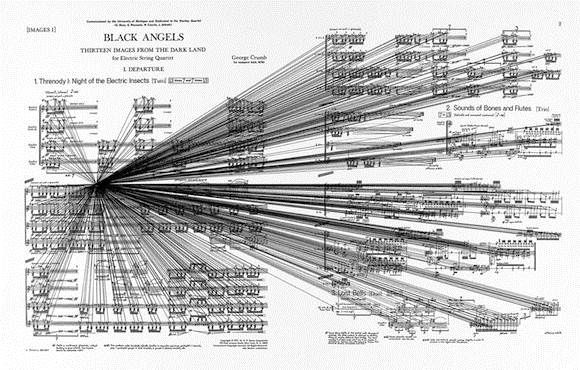 Through his deceptively straightforward approach, Fusinato underscores the disjuncture between object and action. On the one hand, focusing on a score’s visuality maintains its existing silence and withholds the potency of a subsequent performance. Furthermore, overlaying one rigorous visual logic on another is visually and conceptually recursive – a finished drawing upon a finished drawing. Yet the results crackle with power. Indeed, Fusinato considers these “recompositions” to be new scores. If you performed his additions literally, playing every note at once, you’d hear a complex flash of noise – “a moment of consolidation and singular impact”. This recalls Fusinato’s infamous Aetheric Plexus (Broken X) (2103), in which a collapsed conurbation of theatre lights and speakers dazzles unsuspecting viewers with an unexpected burst of light and noise. 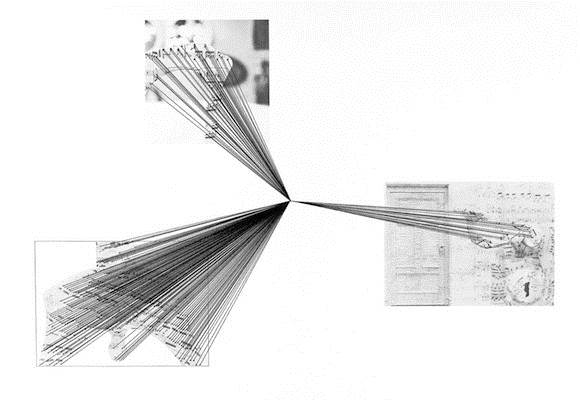 Nonetheless, it’s hard to reconcile the image of Fusinato painstakingly inscribing each line with the blistering heat of his actual live sets. Recently at Dark Mofo he played ear-bleedingly loud electric guitar alongside upturned cars struck as percussion. The volume was at least 30 times louder than passing traffic. Yet whilst Fusinato grew up obsessed by punk these pristine scores remain safely behind glass. Is this simply re-investing the value of the score as object against the material viscerality of performance?

“I’m interested in both,” says Fusinato. “There’s an allure and beauty with the object but what it proposes is menacing. A lot of my work relies on that tension… between noise/silence, minimalism/maximalism, Hi/Lo and so on.”

As a series ‘Mass Black Implosion’ acts as a useful primer to the experimental music canon, despite the counterintuitive implied results (few concerts would juxtapose the divergent work of Murail, Crumb and Reich). Fusinato’s process also functions as an intriguing if elliptical musicological tool. Whilst Cage’s spare ‘Concert for Piano and Orchestra’ yields an expected visual transparency, the surface simplicity of Satie unexpectedly resembles the lush complexity of Tristan Murail. Ultimately, it is both a distended personal playlist and a critique on “who and what gets published and then what I can get my hands on at any given moment. Like any industry… power, control and distribution.”

Julian Day is an artist, composer, writer and broadcaster. 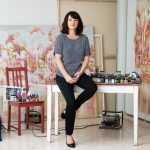 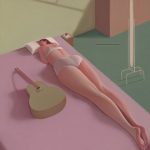 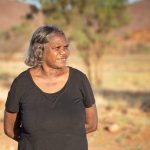