Teelah George takes a good yarn global with an expanded view of our most ancient ability, storytelling. ‘Broadly, I am interested in notions of time, labour and material relationships. From this basis, I will often respond to a more specific idea, for this show it has been the embroidery sampler and drawing parallels between the way I work and think as a contemporary artist to these historical pieces,’ she said.

The artist considers deliberate and unconscious symbols within both refined cultural objects and practices, as well as the role everyday ephemera and its use plays in narrative and history building – even what is said or conveyed in perceived ‘error’. Her interest in material culture connects seamlessly to tactile work. She practices painting, drawing, prints, textile art, sculpture and installation separately and at once. The ‘sampler’ is a domestically produced piece of embroidery that is used as a tool for learning and a way to practice specific techniques and combinations. Fascinated by the history and associations of the sampler, she turned to design books and visited sampler collections in Perth, Ireland and Berlin.

George explains ‘Repetition is an important part of what I do as an artist. I find it interesting that though repeating the same action, something different always emerges. This is something that became evident in the samplers too. I became particularly fascinated with the ‘boxer’ motif, which is coveted by collectors of embroidery samplers. Throughout time the motif has morphed, both in physical character and meaning. This kind of mutation (for want of a better word) becomes part of the story, like an unintended but delightful story.’

While we won’t pretend they’re static, the show is comprised of three considered elements; bronze, painting and textile. One inspiration was the recreated historical rooms in the Musée des Arts Décoratifs, Paris and the relativity of the items in those spaces, a harp, for example, could be valued for its historical significance, utility, and, as an art object. As such her bronze work A harp (2020) echoes the line of the embroidery in other works, questioning the hierarchy of materials and presenting an opportunity to form new relationships between them. Close attention is also paid to the symbolism of our use of materials, in creation and their latent meaning or wear and tear. Some pieces have been made from old works, either found, reworked or remnants from other paintings, such as Bruise (2019-20), Rust (2020) and Patina (2020).

Cross-pollination affects not only her material choices but also colour, as she explained, ‘the way the colours had changed and deteriorated over time. Many of the samplers were faded and stained, some affected by smoke from being unframed above a peat stove. This idea of staining and the changing of surface became interesting to me and informed the colour choices throughout.’

Clearly, the artist is inspired by objects crafted for human use, which by this utility change over time, but what insight is she chasing? George shares ‘I think this is the question that I am always trying to answer but know I never will. I think there is something unfathomable and profound about the human endeavour to make or represent something. Then the will to keep that thing in a collection with other things created throughout history adds another layer of fascination for me. Sometimes an object just holds my attention, and by making work that responds to it in some way I am having a conversation of sorts. Then for my work to become part of a collection, become something for someone else to get something from in the future. There is something about that; I find it kind of amazing and thrilling to be part of.’ 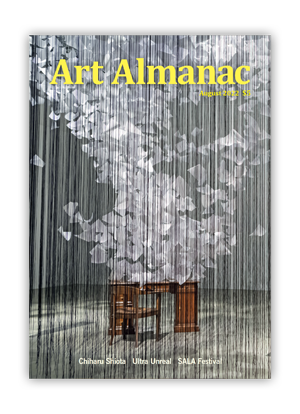 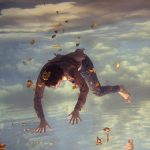 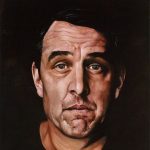 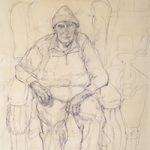